A lot of human foods are perfectly safe for dogs. However, many of us are not fully aware for the extensive list of foods dogs shouldn’t eat. When getting a new puppy, it is especially important to be educated on what not to feed dogs.

Some of these foods may or may not be allergens for your unique dog. So when giving dogs anything new, be sure to give them a small amount and watch closely for an allergic reaction.

Never Give These 22 Things to Your Dog

Scroll down to find out why you shouldn’t give these foods to your dog!

Xylitol is a sweetener that is sometimes used in candy, gum, diet foods, peanut butter, toothpaste, mouthwash, and baked goods. While not toxic to humans, even a small amount can cause huge health risks for dogs. At first, symptoms include vomiting, lethargy, and coordination problems. Later on, dogs may experience seizures and liver failure. [1] [2]

Yeah… This is serious!

Macadamia nuts are probably the wort nut you can feed your dog! According the WebMd,

Just six raw or roasted macadamia nuts can make a dog sick. Look for symptoms like  muscle shakes, vomiting, high temperature, and weakness in his back legs. Eating chocolate with the nuts will make symptoms worse, maybe even leading to death.

Almonds, while not toxic, can cause your dog to choke or cause esophageal tearing if not chewed properly. [2]

Once animal bones are cooked, they become soft and brittle. This makes it easier for them to break and splinter. And can cause the bones to become lodged in your dog’s throat or damage the digestive system. [2], [3]

Onions, garlic, chives, and leeks be it dehydrated, powdered, fresh or cooked, contain disulfides and sulfoxides (thiosulphate). These chemicals can injure red blood cells and cause anemia. Symptoms include vomiting, weakness, and breathing problems. [1], [3]

The chemical, amygdlin, found in the casing of apple seeds can be harmful in large amounts. When digested, it releases cyanide which can then invade the bloodstream. [1]

Feeding your dog excess dairy can cause digestive problems similar to lactose intolerance in humans. [2]

The avocado seed can become lodged in the digestive system which could definitely be fatal. Along with the seed, the bark, leaves, and fruit contain persin. This is fungicidal toxin that isn’t harmful for humans who aren’t allergic to it, but too much can be harmful for dogs causing diarrhea and vomiting. [2]

Raw and cooked fat trimmings, as well as fatty foods, can cause pancreatitis. [1]

Certain breeds like miniature schnauzers, Shetland sheepdogs, and Yorkshire terriers appear to be more susceptible to a bout of pancreatitis than other breeds.

The fleshy parts of these fruits are fine. However, the pits – seeds – are large enough for your dog to choke on. The pits also contain cyanide which is poisonous to dogs and humans. [3]

Alcohol affects dogs the same way it does people, but much worse. Ingesting alcohol can cause vomiting, diarrhea, decreased coordination, breathing problems, and may even lead to death.

The Pet Poison Helpline lists hops – a plant used in the process of brewing beer – as a possible toxin. [7]

Surprisingly, it’s not exclusive to salmon; perhaps even more surprisingly, the organism responsible for the disease is not harmful to fish.

Theobromine is the substance in chocolate that causes many problems. Darker chocolates with less sweetener pose a greater risk of toxicity compared to overly processed chocolate like white chocolate. Depending on how much chocolate your dog ingests, symptoms could be fatal. [7]

Feeding dogs too much salt can cause sodium ion poisoning .

Consumption of tobacco can cause a lot of problems for your dog. According to Pet Poison Helpline, it can cause…

These little fruits can cause big problems. Even a small amount make dogs very sick and can cause kidney failure. Early on, your dog may vomit repeatedly. Lethargy follows soon after. [2]

Because yeast causes dough to rise, if eaten raw, dough will expand in your dogs abdomen causing pain and discomfort. Another side effect of eating raw dough is alcohol poisoning. This is caused when the yeast ferments and produces alcohol to make the dough rise. [2]

According to the Pet Poison Helpline,

Coffee beans, grounds, coco, tea, soft drinks, energy drinks, some supplements (like pre-workout and weight-loss supplements), and chocolate all contain caffeine that could be very harmful to your dog. [1]

White bread bought from the super market contains high levels of oils and sugar. This can cause pancreatitis, especially if your dog eats a lot of bread. [3]

These contain oxalates. Which can cause, drooling, vomiting, diarrhea, lethargy, weakness, tremors and bloody urine.

Raw eggs can host many harmful bacteria such as salmonella and E. coli. Feeding your dog raw eggs white can also cause a biotin deficiency.

Thoroughly cooked eggs are a great source of protein and are good for soothing your pet’s upset stomach. [6]

Any over the counter or prescription medications not recommended by your pet’s veterinarian are not safe for animal consumption.

Human vitamins often contain 100% of the recommended daily amount of various minerals. This could cause a mineral overdose for your dog. The most dangerous vitamin is prenatal vitamins, which have a higher dose of iron and can cause iron toxicity in pets. If your dog ingests a bunch of prenatal vitamins (or other vitamins with a high dosage of iron), you should call your vet immediately.

While cinnamon is not actually toxic to dogs, it’s probably best to avoid it. Cinnamon and its oils can irritate the inside of dogs’ mouths, making them uncomfortable and sick. It can lower a dog’s blood sugar too much and can lead to diarrhea, vomiting, increased, or decreased heart rate, and even liver disease. If they inhale it in powder form, cinnamon can cause difficulty breathing, coughing, and choking. 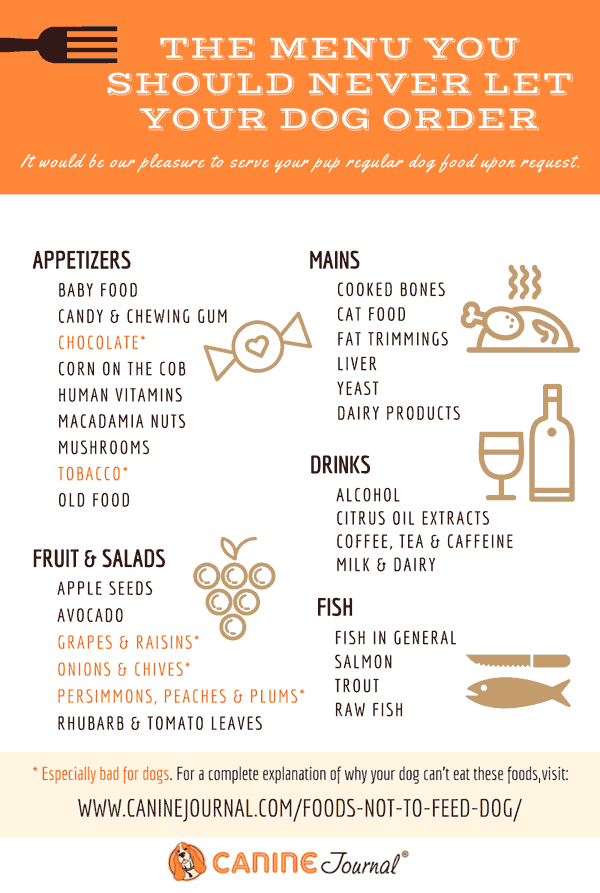